Developed in the 11th Century, “Cinque” Ports were specialized Harbors and Ports along The English Seaboard, which were granted Royal Privileges from specific Taxes. In exchange for such “boons”, these Harbor Cities and Towns were required to provide a King or Queen with a certain amount of Ships (mostly Warships). As such, these “Cinque” Ports were allowed to fly a specialized Flag which identified their status. There were 5 such Ports. They were Hastings, Hythe, Romney, Hanover and Dover. The Flags were roughly 10-foot by 10-foot. A Countercharge Pattern. The Field of The Cinque Flag was partially Red and Blue (equally parted). The Red portion featured the three Gold Lions (outstretched) which were The Symbol of England’s Royalty. The Blue portion featured three Gold Ship Hulls. The images “met” in the Center of the flag. The Normans were credited with it’s creation (in part). Although no official Cinque Ports exist, a Ceremonial Flag is still used by “Ancient” Cinque Ports. These Flags do not feature a Royal Lion. Three full sized 11th Century Vessels in Gold are placed, Center – against a light Blue Field. 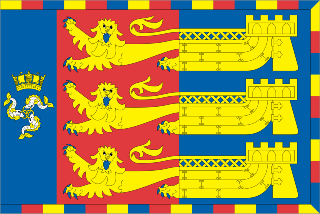