Over 3,000 “Horsa” Gliders were manufactured for use in World War II (1941), by The Royal Army and Navy. The AS.51 could accommodate 30 fully equipped Airborne Soldiers. The “Horsa” saw service in Normandy and Sicily. The US Army also adopted a variation of The AS.51 along side it's “Waco” Glider. As with most Gliders, The “Horsa” was transported via rear guide line to a required height (roughly 5,000-feet). T could achieve a maximum glide speed of 100-mph. Crewed by (2), The AS.51 could transport up to 15,000-pounds. They were 70-feet in length with a wingspan of 90-feet. With the need for “Glider” Operations waning after World War II, most Gliders such as The “Horsa” were decommissioned and would eventually be scrapped. However, many examples of The AS.51 have survived in Museums. 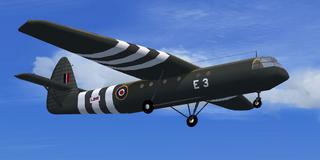