Developed in England in 1855, The Armstrong was a breech loading, rifled heavy barrel weapon. Designed by Sir William Armstrong, these guns were composite pieces involving wrought-iron tubes surrounded by iron coils over the tube and shank. This caused compression which would strengthen the barrel for the large gunpowder charges that were used. Field pieces came in 6, 9 and 12-pound varieties. Naval and Coastal defense came in 20, 40 and 110-pound versions. The Armstrong featured an early systems called "polygroove". Shells were conical shaped to fit a similarly shaped inner barrel (thus assisting with the rifling trajectory). The British Navy used The Armstrong during The Opium Wars in China and in New Zealand (against The Maori). Armstrong Guns were also used with a new system of carriage known as "The Disappearing Gun Carriage". This was a modified gun carriage which could be raised and lowered (via traction gears). These new forms of defense systems were seen primarily in The Caribbean and among US Coastal Defense Systems until the beginning of the 20th Century. 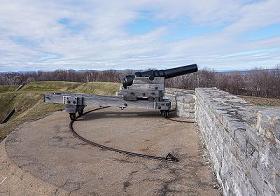