During World War II, The German ''Blitz'' attempted to dominate The British People in their struggle to resist Adolf Hitler's juggernaut of Luftwaffe Bombers. Almost non-stop Bombing Raids supported by a plethora of German Missile and Rocket attacks, destroyed thousands of homes and industrial centers. Undeterred, The English People resorted to protecting themselves with a ''familiar'' recourse – The Bomb Shelter.

Such structure were not unknown to England. Many alive then – remembered World War I and the same Enemy, Germany – who had used Zeppelin and mid-altitude Bombers to deliver munitions onto London and it's surrounding Cities. Such protective structures to survive Bombing Raids were constructed and even became a ''cottage'' business venture for some.

However, World War II saw the advent of more precise and deadlier missiles and rockets (V1, V-2, etc). The ''Buzz Bomb'' Era had arrived in England by the late 1930s and with it more advances (and mistakes) in protection shelters. The London Underground Subway Train System was till the best form of shelter available for many. However more personal shelters were also devised for those who might not live near enough to an Underground entrance.

The British Office of Engineering working with Civilian Contractors devised The Anderson Shelter. These were pre-fabricated, galvanized and corrugated steel paneled structures. (14) such panels plus a front door made up a typical Anderson Shelter. Roughly 6-feet tall and 6.5-feet long, the structure was 4.5-feet in width.

The Shelter was typically buried underground with a trench dug which led to the entrance. Air venting tubes were connected for direct air or in cases of more ''wealthy'' occupants – air circulating systems. In some cases, even more advanced techniques (such as the connection of several Anderson Shelters) – could create larger living accommodations and even sustainment Gardens. Water pumps and sewage attachments could also be installed.

In most cases, The Anderson was placed under the Basement of a House or living residence. With warning, a Family could evacuate into their Anderson. Even if a direct ''hit'' completely destroyed a structure, The Anderson would survive. British Government records maintained exact locations so the occupants could be extricated.

A common issue with The Anderson was that normal electrical connections were deemed impracticable. The majority of ''electricity'' was generated by battery power. As such heating in winter was a major issue. This as was problems with flooding were also reported. Over 1.5 Million Anderson Shelters were built and installed throughout England with an amazing record of saving lives during The War. 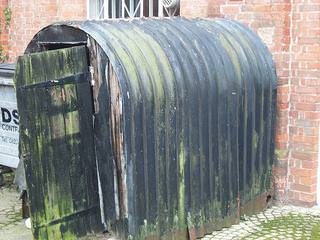