The ''Sexton'' was a 25-Pounder, Self-Propelled Artillery Piece that was used during World War II (1943) and later in the early phases of The Cold War. The Artillery Cannon was set on a US Tank Chassis (The ''Lee'' and ''Sherman'' Models were used. The Cannon fired a HE or AP 3.45-Inch (25-Pound) Shell over 13,000-yards. Secondary Armaments were a variety of Heavy Machine Guns. The ''Sexton'' was used with great success against The German Afrika Corps. in Northern Africa (the shell well capable of piercing the armor of their ''Tiger'' Tanks).

Weighing 25-tons, The ''Sexton was 20-feet in length and were 8-feet tall (with a width of 9-feet). Dual tracked, they were propelled by a Single Continental 9-cylinder Radial. The Gun used Gasoline and not Diesel. Armor plating was rated at 1.5 to 2-inches throughout. (6) Soldiers composed a typical Gun Crew. Operational Mission range was around 125-miles at 25-mph. Maintained in The British Inventory until 1956, many ''Sextons'' were sold to Friendly Foreign Nations, with some still in operation. 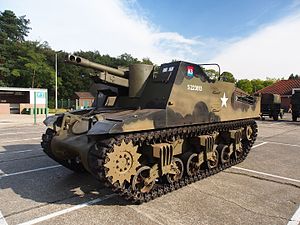