Great Britain's 105th Regiment of Foot was an Irish Volunteer Military Formation raised in 1778. Numbering 1,000 – these Soldiers who were Irish Immigrants who supported King George III and volunteered to fight against The Colonial Americans. These Soldiers were classed as Loyalists. Over 1,000 Men volunteered to The Regiment, which was commanded by British Officers. The Regiment formed in Philadelphia, Pennsylvania. In addition to Irish Volunteers from Pennsylvania, others flocked from other Colonies. At one point, the numbered 105th Regiment swelled at 1,300 Officers and Men (one of the largest of all Loyalist Units raised for service in The War).

Fighting at Camden, New Jersey, Charleston, South Carolina and a score of smaller engagements. Their numbers dwindled by lack of replacements, it was at The Battle of Ninety-Six (a South Carolina siege of The fortified Village of Ninety Six, that only 550 of The 105th stood off repeated infantry assaults of Patriot Forces (1,100) in 1781. Itb was among the last British victories of The War. Mustered out in 1784 (1 years after The War) in New York City, those survivors were shipped to Nova Scotia (Canada), where they remained in a ''Reserve Status''. Later that year, The 105th was sent back to England and formally disbanded.

The Regiment wore the traditional Uniform of British Loyalist Regiments in America, with minor variations. The Scarlet Red Coat with Green Trim was standard, but some Companies wore Green Tunics with red Trim. Trousers, shirts and related were White or Buff. Standard 18th Century British Infantry weapons and equipage was used. 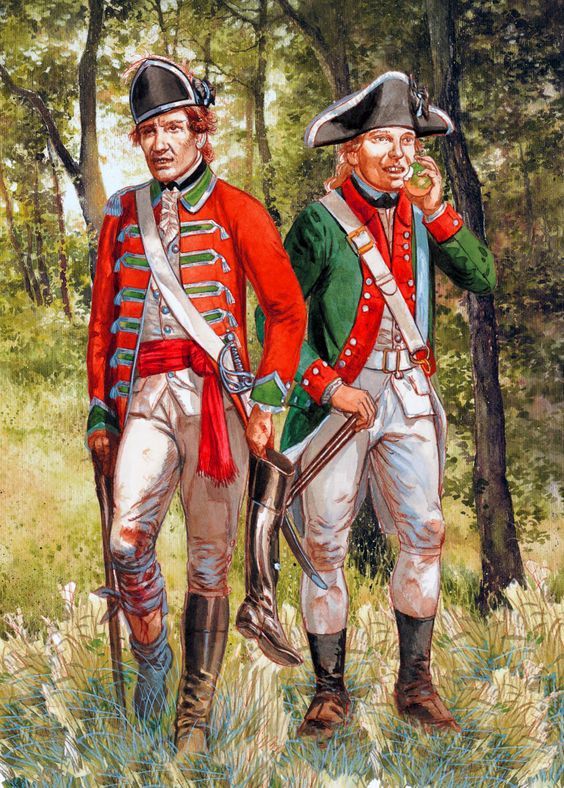