''Brilliant Pebbles'' was a late Cold War Era Defensive Program, first experimented with in 1987. It was originally part of The US ''Star Wars'' Initiative. This System of ''Space Defense'' was designed to use various Satellites and possible Orbital Devices, as a Defensive/Offensive weapons platform – against an Enemy. Highly controversial, most of these Plans n ever came to light (but were planned). Part of The ''Ballistic Missile'' Class of US Weapons, ''Brilliant Pebbles'' (it's Codename) – involved the launching an orbital stabilization platform (similar to a Shuttle-type Vessel). These ''Pods'' carried a Dispersal Packages which contained hundred and thousands of smaller Rockets (called ''Pebbles'' or ''Rocks''). Sophisticated guidance and target systems were controlled from Ground Sources.

Upon detection of a possible Enemy launch (ICBM), The ''Brilliant Pebble'' Systems (of which hundred would be deployed at key and strategic locations in Orbit, would launch it's ''Rocks'' towards in-coming Multple Re-Entry Devices, basically creating a 19th Century ''Volley Fire'' of Rockets to cascade through the projectiles (hopefully destroying them many miles up and away from US Soil or Territory.

Over 4,000 such Platforms were to be launched and stationed (beginning in 1991). However cost overruns rose to $20 Billion (USD) each. This proved too much and ''Brilliant Pebbles'' was canceled in 1993. 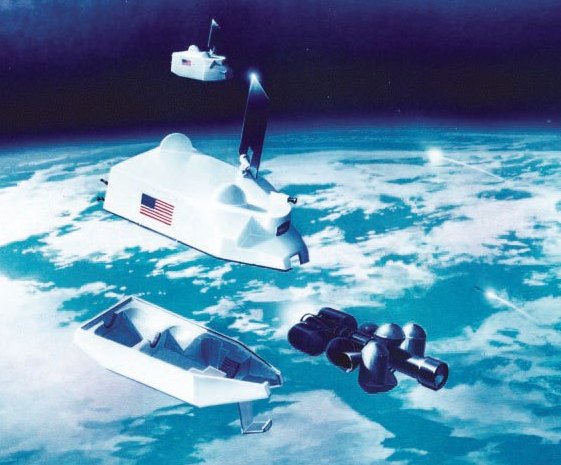