Although the use of earthen temporary fortifications goes back many centuries, they began to be used more and more in the 18th and 19th Centuries. Indeed, the use of Breastworks was heavily employed in World War I (and after). As armies began to slowly ween themselves away from “Napoleonic tactics” (grand formations followed by slugging it out musket to musket), and with the advent of rifled artillery (with deadly accuracy) – the need for temporary field protection became tantamount. Normally, earthen berms made from digging trenches. The spare earth was thrown to the direct front of the trench (creating a wall). Often reinforced with wood, stones or other defensive devices (Abatis etc), a force would be able to fight and protect itself from enemy fire (even artillery to a lesser degree). Most world armies had used (and still use) this simple but effective technique. 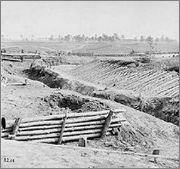