Descended from the original Dutch Settlers (“Boer” or “Farmer” in Dutch-Afrikanner) of The Dutch East India Company that settled in South Africa, The Voortrekkers established settlements throughout South and Eastern Africa. They were similar to America's Great Pioneer Settlers of The American West. Often at War with local Tribesmen (especially The Zulu), they would also run afoul of British intentions. Although they were involved in an undeclared War with The Zulu, no official “Army” was raised and they fought most often as Militia. The Voortrekkers would eventually establish The Orange Free State and South African Republic (both of which would last until 1900 (until annexed by The British Empire). The Voortrekkers loosely adopted a Standard which was a Blue Field in entirety. A Red St. Andrews Cross was placed upon The Field, stretching from quadrant to quadrant. 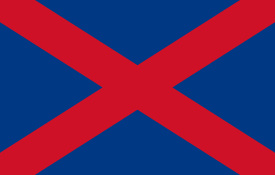