As we have seen, Armor used for protection by Warrior and Knight, is many Centuries old. Even with the advent of gunpowder and firearms, Armies strove to find methods to protect their Soldiers. Many innovations were tried in this Field in the 19th Century, and The American Civil War was a testing ground for such attempts. Although The Federal Government did not experiment as such, Private Manufacturers did. As early as the first weeks of April 1861, Models were sold, billed as “Bullet Proof”. Resembling The European Cuirasse and Breastplate,  these pieces were of 1 and 2 piece construction . Made of Iron, roughly  .05 to 1-inch in thickness, they were worn on the front (torso). Most did not feature a back section.

These pieces were placed inside carriers made of Cloth and designed to be concealed as a Man’s Dress Vest. They were no doubt heavy and were not conductive to hot conditions. Often too expensive for the average Soldier, nonetheless – Families would purchase them for their loved ones in Uniforms. Supposedly rated to stop bullets, other than a .36 Caliber Pistol round, they did not hold up against the standard .58 Cal. Round. They would have assisted in stopping The Bayonet thrust and Saber cut, however. By 1862, The “Iron Vest” (as some called them), literally fell by the wayside of many Marches. They nonetheless served as prototypes for the future of Modern Body Armor. 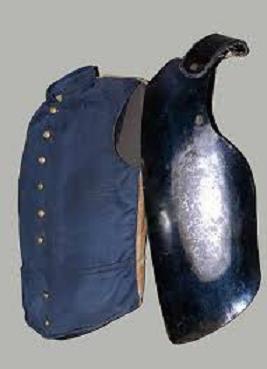