Bishop was the top ranking Ace of Canada during World War I. Originally serving in The Cavalry, he found the Trenches “boring and dirty”. One day he saw a Recon Plane flying over his position. He transferred over to The Royal Flying Corp. He showed an “”uncanny” ability at Marksmanship. He served primarily as an Observer in Recon Planes (until he earned his wings). As a Pilot, he quickly began to amass kill after kill. Known for engaging multiple enemy targets, his courage in battle was unequaled. Upon making his first Ace Rating, his plane's nose was painted blue (as was tradition). Bishop wanted a red nose (but that was reserved for the current highest raking English Ace). Bishop also was one of the few Allied Pilots to survive an encounter with Germany's “Red Baron”. His skills during this action won him a Distinguished Flying Cross. Bishop received The Victoria Cross for attacking a German Aerodrome (Base). He was credited with 72 confirmed kills. After the war, he helped create The Canadian Air Service, retiring as an Air Marshal. He died at 56. 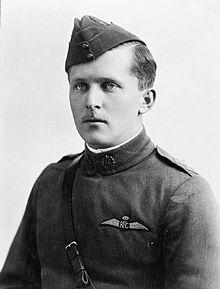