The first mass produced Australian Sub-Machine Gun, The Owen Machine Carbine was first designed in 1939. Mass production did not go into effect until 1942. Over 45,000 were made and deployed with Australia's Army until 1945. Weighing 9-pounds and measuring 32-inches, The Owen was a light weight weapon that featured a top loading magazine ammunition clip capable of 33-rounds. Comparable to the .42 Cal. Round, The Owen had a maximum effective range of 130-yards. Later, during it's deployment during World War II, a .45 Cal. Version was briefly used. The Owen also featured a dual hand grip system which affixed it an excellent grip and fire control. A major safety drawback for The Owen, was it's lack of any safety devices. This was problematic during the rigors of combat. Nonetheless, The Owen was very successful in the Jungles of The South Pacific. One innovative feature, was a Port Shield that protected the weapon from excessive dirt and debris from jamming the firing mechanism. Although production ceased in 1945, The Australian Army still deployed Owen Guns until 1973. 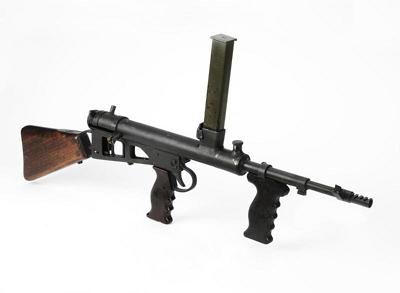