The ''Augustaion'' was a section of property located withing Ancient and Medieval Byzantium. The space went back as far as the 1st Century AD. Originally, it was though that The Augustaion was a Public Market, akin to The Western Roman Late Period Forums. In the 6th Century AD, it was an enclosed Courtyard which was restricted to ''prayer preparation via mediation'' prior to the entering of an adjoining Religious or Administrative Building. Often important ''outside'' Art was placed inside the enclosed Augustaion. Many of these were either procured through War (Conquest) or commissioned. In this mode, The Augustaion were seen as ''Outdoor Museum Gardens'' (whereas often beautiful plants and trees were included as well). With most being destroyed with The Ottoman Capture of Constantinople in the 15th Century AD, remains of the last Augustaion can still be seen outside The Hagia Sophia. 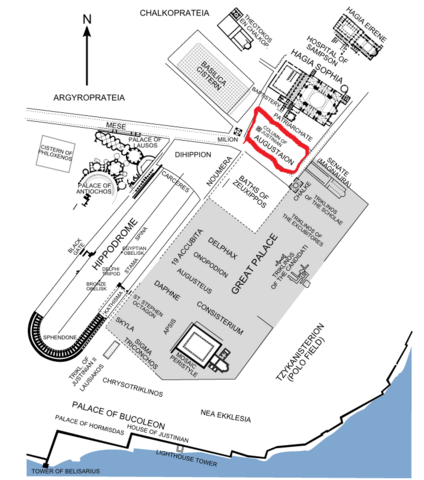