Officially known as The Amerikadeutscher Volsbund, it was a German-American political party which was formed in 1936. The Party was made up of German-Americans radicalized into support for Germany's Adolf Hitler and The Nazi Party. The Party at on time boasted a 20,000 person membership. With the goal of trying to influence American politics to create a Pacifist movement to keep American interests out of Germany's political and military ambitions in Europe, their anti-Jewish stance - coupled with political corruption, caused the Group to disband in 1939 (with many of it's leaders being deported). The Bund Flag was a White Field with a large Red Cross Pattie, quartered throughout. Centered in the Cross, was a Gold Swastika emerging from a series of Gold bars. The base of the bars terminated in a Gold and Black "AV" - which stood for the Parties German name of Amerikadeutscher Volksbund. 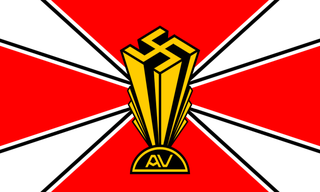