With Hitler's Germany running rough shod over Europe and Japan doing the same in Asia (1941), America had thus far, remained "officially" uninvolved. Back in 1937, Japan set it's eyes on conquering China. The Country had no modern Army or Air Force to defend itself. Gen. Chiang Kai-shek had made overtures for help to America. US President Franklin Roosevelt needed to be cautious. He did not wish to go to War. Still, he could not stand by and see China fall to Japan either. Moving mostly obsolete Military equipment, he also sent retired Army General and experienced Flyer Claire Chennault as Advisor.

Determining that Japan was quickly gaining complete air superiority over China. This was the key to Chinese survival. Chennault was able to secure 100 Curtis P-40 "Warhawk" Fighters  (renamed "Tomahawks"). Roosevelt also allowed any US Pilots who wished, to resign their US Commissions and join in Chennault's plan of establishing a "Chinese Air Corps." The American Volunteer Group was born in July, 1941. Composed of 100 Flyers, they called themselves "The Flying Tigers", painting a set of "Tiger Teeth" with an "Eye" above them. Theyou were divided into 3 Squadrons: "The Adam and Eves", "The Panda Bears" and "The Hell's Angels".

Although the Japanese "Zero" Fighter was a far superior Fighter, The "Tigers" developed a unique tactic. Multiple Curtis Fighters would climb high above Japanese Aircraft, diving on them in tandem at speeds of 400 mph. The tactic "evened the playing field considerably". Their fame grew. A Walt Disney Studio Cartoonist the had read about the famed "Flying Tigers". He designed their now famous insignia of a Springing Tiger inside a "V" for Victory. It was painted on the fusilage of all their planes. Pilots had no American insignia, or anything that could identify them as US Fighters. They wore a standard leather flight jacket, upon the back of which was sewn the now iconic "Blood Chit". A large Chinese Republic Flag was affixed with "instructions" in Chinese, advising any Chinese citizen to give aid and assistance.

The "Tigers" boasted a confirmed kill ratio of 300 enemy Fighters in the 7-months that they existed as The AVG. They lost only 10 Planes and Pilots. With America's involvement in the War with the Attack on Pearl Harbor, by 1942, The "Flying Tigers" were absorbed into the Army Air Corps as The 23rd Fighter Squadron (although they still retained their title of "The Flying Tigers"). They also retained their record as effective Pacific Fighters. 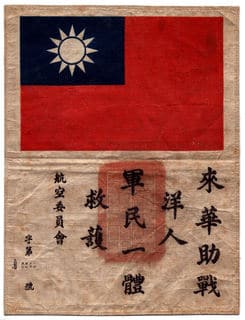