The American Revolution (1775-1783) was known as The “Shot Heard ‘Round The World” – with regards to The American Colonies of Great Britain being the first to rebel against a European Power for political freedom to become an independent Nation. The “Shot” would spread to other Countries (France and Italy among others).

However, many American Colonists were not in agreement with Revolution against The British Crown. These American Colonists refused to bear arms or support The American Cause of Freedom. These Persons would form the bulk of a Military Unit known as The Loyalists. Also known by American Patriots by the derisive term of “Tory”, Great Britain recruited up to 100 Loyalist Regiments (with records listing as many as 50,000 Men). The majority of these Regiments were raised in The Colonial South (although some were likewise formed in Northern Colonies under heavy British Occupation).

Great Britain also made overtures to Colonial African American Slaves and Native Americans. In the case of The Slave, if they bore arms against The Patriots, they would be given their freedom if Great Britain was victorious. With regards to The Native Americans, they were offered the continued Truce and Treaty (which an American Nation would not honor).

Formed late in The War, the standard Uniform that Loyalist Armies wore was Green (with a few using British Scarlet Red) with a variety of Headgear. They were likewise commanded by American Loyalist Officers. They were supplied with British arms and materials. Some were formed into Cavalry and Artillery Regiments as well. In most battles that they fought The Patriots directly, both sides fought with much ruthless bloodshed. It was as close to the bloodshed with would be seen in The American Civil War of the 1860s.

With an American victory (1783), many Loyalist fled America in fear of reprisals for their support of Britain. Many settled into Canada and Mexico, with some moving to the few remaining British Colonies in The Caribbean. Some did however stay, facing a largely negative existence in their respective Regions. With Westward Expansion into captured Native American Territories (after The Northeast Ohio River Valley Wars), many old Loyalist relocated there. 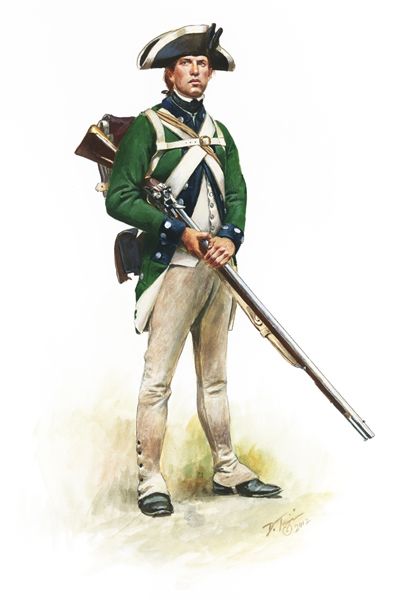