Established in 1775. The 3rd New York Regiment was composed of (10) Companies of Volunteer Infantry, recruited from (4) Counties within The Colony of New York. They were raised in response to American Independence from Great Britain, occasioning The Revolutionary War (1775-1783). Mustering 760 Officers and Men, The 3rd was seconded to The Continental Army of George Washington and served mostly in The Eastern Theater of The War. The Regiment took part in the abortive Canadian Invasion of 1775.

Serving in (6) more Campaigns, The 3rd would be eventually absorbed into The 1st New York Regiment (due to suffering 60% casualties) in 1780. The Regiment was one of many who suffered it's Veterans Pensions, promised as a result of service. Without Federal Aid, many sought the path of State Rebellion, but New York struggled to support it's Veterans, finding ways to pay them. The last member of The 3rd would survive until 1864.

The 3rd New York – as did others of The State, adopted a State Flag as their Battle Standard. New York was one of the few American Colonial ''States'' to develop it's own prior to The War. The State Banner of The 3rd featured a Light Blue Field with a stylized Seal centered. The State Motto ''Excelsior'' featured prominently on a Lower Banneroll. The Regiment adopted a variety of Uniforms while in Continental Service, but most adhered to a Dark Blue with Red Trim, over a Buff or White Trouser, Shirt and Vest combination. 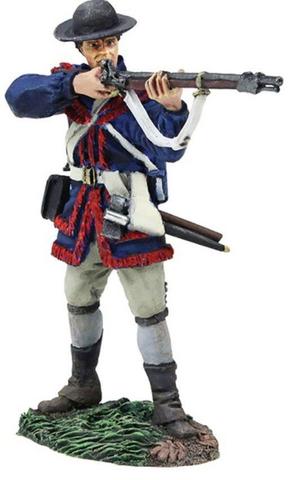