Developed by German Chancellor (and later Fuhrer), his personal Standard reflected Hitler as Head of The Nazi Party. Hitler became Leader of The Party in 1933. With National Socialism now the predominate political party in Germany, then President Paul Von Hindenburg, installed Hitler as Chancellor. It was assumed with the death or resignation of The President, Hitler would assume the role of Reich President. With Hindenburg's death in 1934, Hitler abolished The Presidency in favor of a new Title - that of "Fuhrer". As with most Leaders, Hitler supposedly invented his own personal Standard, to be displayed whenever he was in the Public view, and to symbolize his "presence" at The Reichstag (German Parliament). Based very much on the Ancient Roman Vexillum and Signifier  (Banner and Image), his Colors were a 3x3 Banner.

In the Field of the Standard was a large Swastika, centered on a circular field of White. Encircling this, was a Golden wreath. The remainder of the standard was 4 Red corners. In the Upper Left and Lower Right corners were Golden Alder Eagles (clutching a Swastika). In the Upper Right and Lower Left corners were Golden Weimar Eagles (again clutching Swastikas). Normally displayed on a Vexillum Pole, the Title above the Standard bore the name "Adolf Hitler" with the letters of The Nazi Party "NSDAP" on the reverse. As with a Signifer, the German Adler Eagle in wreath, was perched above all.

This was used from 1934 until 1945. Used in parades and bore in front of Hitler whenever he entered a room or building, a traditional Flag/Car Guidon was designed to be flown from his personal vehicles. The fate of Hitler's Standard is somewhat unknown, many claim it was either destroyed during The Battle of Berlin or captured by Soviet Forces. Of all the captured Standards in Russian custody, none are clearly "The Fuhrer Standard". 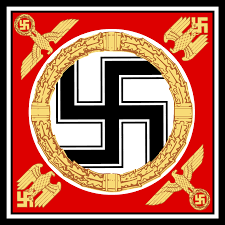