Located in Monmouthshire, Wales – Abergavenny Castle dates to 1075. Built as as Norman defensive structure to protect The Usk River, it was a Concentric classification of construction. Originally a wooden Motte and Bailey building, a large ditch was constructed for defense. This in turn was protected by a wooden Palisade. In the later 12th Century, the Castle was re-worked in stone. It possibly featured 6 and 8-foot stone interior walls, with a 10-foot Perimeter Curtain Wall. Evidence of a Keep and interior structures such as a Chapel, Bakehouse and Armories have been found (foundations). Abergavenny Castle features infamously into Welsh history as the site of The 1175 Massacre of Welsh Lords. (involved in an internal Clan rebellion). Opposing Forces (coming to the Castle for Truce Negotiations) – were gathered in the Castle's “Great Hall” and murdered (thus ending the strife). Not to be undone, surviving factions besieged Abergavenny, captured the transgressors and damaged the Castle. Rebuilt in 1190 (and reinforced with sandstone to strengthen it's defense), Abergavenny switched hands between Welsh and English Masters during the establishment of the “Welsh Marches” (Border establishments and disputes). The only known English Monarch to visit the Castle was England's King John (1215). Eventually falling into English Nobility ownership in the 14th Century, several private interior structures were added (and renovated). Attacked again by rebellious Welsh Lords, the castle was again sacked (and this time burned). Slighted during The English Civil War under orders of King Charles I (to prevent usage by Parliamentarian Forces), it was never rebuilt. Formal renovations to preserve what was left of Abergavenny Castle was begun in the late 19th and early 20th Centuries. 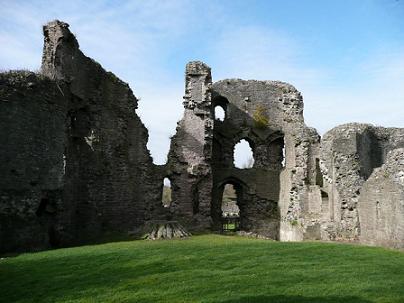