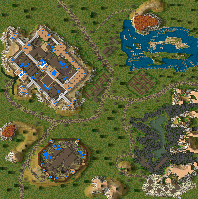 The Sachsendorf castle was a lowland castle in the market town of Burg-Kühnring. The castle was built in the mid-11th century as a feast house at the back of the Manhartsberg hill.

Short background: All castles are located in a roughly drawn Fantasyland, which consists of the north east, south and west, and in the different conflicts are carried out during the 650 years. (1000 – 1650)

1180 are free commercial cities in the war against Negre - Knight Alliance, a throbbing on ancestral rights knight alliance. Grave Ville, the city's builders has, however, issued in the protection of Gemminger, a royal duke gender, and neglects his castle, which is managed only by you. The Negre Knight Rudolph of Berneburg do not like this development, and he tries to destroy Sachsendorf.

The way of scripting is meanwhile very developed. Therefore you will find here some necessary information.

You are always playing one of the character, in this case you will be the rat. The dialogues would be otherwise complete senseless and irritating.

Events are always connected , can enduring for a long time. For example: rabbits, wolves, bandits, fire. You should be prepared for these disasters, otherwise you will loose.

Your general task is managing a castle till the end. It could be a time between 15 and 45 years. In economic missions the armies are small and less dangerous, but they can prevent you from reaching your goals. Some tactics, some people seems to be used to, will not work. The castles are often large, and it will be hard, to care for food. Respect the times, where nothing happens. The combination of events could be very devastating.

Sometimes you will fighting against yourself. This is simply a way of introducing events and desasters, which wil happen only in your country.

Religous Fanatics are composed of Monks, sometimes of spearmen, swordsmen and pikes too. It differs, because it depends on the number of followers.

The terrain is fantastically well detailed. A great map to play!