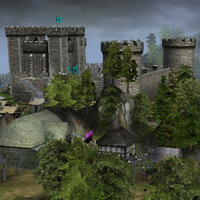 These are fixed castles for Sir William. Normally in the game he would often make moats where he needed to leave space for a tower, and that would leave a gap in his castle thanks to which you would be able to simply walk in, and take him down with no difficulties. Even if this didn't happen he would make his tower doors to the outside of his castle instead to the inside, thus you would also be able to walk into his castle through one of his towers, and again - kill him easily.

Here I fixed those errors, and I made him stronger! Now he has moats around his entire castle which makes impossible for an attacker to attack his walls with laddermen. His only weak point in this matter is the area in front of his gatehouse where he doesn't have a moat, but I have added rock tippers and man traps in that area, so it will be attacker to attack the wall with laddermen. Also, when it comes to the castle on which he has two round towers - I have added one more round tower which makes his defense even stronger, as now he has three ballistae to defend himself.

In my opinion all should download and replace the original castle with this one, unless they already have another fix for Williams castle. This way you will have more fun fighting Sir William, because with these castles he will be as tough opponent as it was meant for him to be - the one who will fight like a lion!

- This one contains fixes of some other castles, and also some additional castles for many AI lords, and new tiny castles for all lord thanks to which they can handle really well if they were put in a small estate.

Great additions and changes made to the castles!