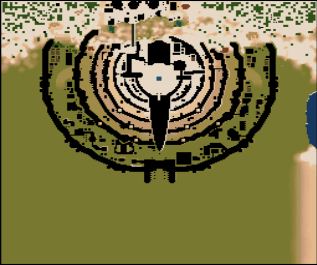 Sorry if it took me some time to finish this one because I got busy and I resumed working on it just this november. Yet again, I always give my 100 percent

with love, passion and inspiration. I took me almost 3 months to make this, together with lots of days thinking what to add or removed, about mission and

speacially the invasion plan. It took me so long because I work it all from creating the map, missions, events, invasions, unit modification & animation,

Honestly the Invasion plan is the most difficult because it is hard to input how many armies would ivade the castle without some lag. So I tried a lot that

sometimes it is stressful and for me to make it easier is to write it down :D On the other hand, landscapes pictures inspires me about the terrain in the

map. Also the SOUNDS of birds, winds, busy city, sea and waves etc., everything I add needs some time to think.

The white city, Minas tirith originally called Minas Anor is the heavily fortified capital of Gondor. As we all know Osgiliath has already fallen to the

hands of orcs so now their massive army is expected any day. Are you as king prepared for the invasions?

1 On this mission you are given 150 months to prepare your defenses for the massive invasion. Gather all your available soldiers. You can also train some

3 Mission 3 is about a massive reinforcement of the enemy that could possibly wipe out Rohan. Don't worry, the Oatbreakers/dead men will come too

Many thanks to the ff owners:

LadyFury unit mod for gondor and for the armed peasant

Please feel free to comment about the map and also post if there is a problem about it because maybe I forgot something, so that I can fix it right away or

hmm I was thinking what kind of map is next, Any request?

The sieges were very well co-ordinated, and the map itself was very well designed. It must have taken you some time, but it was worth it ;)

yeah but first it will be a lot of thanks to the following owners of mods, w/out their modification I will not have the imagination of the army of gondor, rohan and orcs. It all started in viewing some several mods, then the creation of helm's deep and then this. I would like to update the Helm's deep map like this were their is only one zip file to download all, including the Crest, speeches, unit mods and the map. But I was thinking what will happen to the existing file I submitted? hmm I wonder.

Also I would like to ask if someone who has already played this, if did you ever experience some problem on the game? because honestly I have not played this. I just work on a blank editor map testing the invasions and events if it's working from what I expected. It's all about timing and observing the behavior of the cpu players.

But I was thinking what will happen to the existing file I submitted? hmm I wonder

The existing file would still remain there - to be honest I think it's easier the way it is, it gives people the choice of installing the skins and keeps stuff separate. But if you'd rather just let me know.

The map gets a lot of lag towards the end but I played on version 1.3.1 (which has backwards incompatibility issues) and in two goes, saving halfway through.

Yeah I think so because it's already there and may confused the people who already downloaded it if everything's changed. Your right Lord Chris, I really can't stop thinking about the army if they kept coming and coming. It took me several times to adjust the numbers of attacking army from 300 down to 200 to 150, if it will be less than 100 it doesn't look massive anymore.

It's possibly due to the fact that I saved the game halfway through and my version was different - it wasn't laggy at all until this morning when I loaded my saved game.