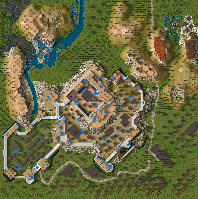 This ist he first of a row of older , already published maps. But the maps itself are changed and sometimes more detailed, and they have completely new, more action orientated scripts.

Although the map bases on the floorplans of castle Wesenberg, it is only partially a model of this castle. Some parts are free designs.

Where you can find Castle Wesenberg:

The castle Wesenberg is a highly medieval tower hill castle on a hill in the north-east of the town Wesenberg in the administrative district Mecklenburg in Mecklenburg-West Pomerania.

Only the donjon ( Fangelturm) and a remainder of the encirclement wall is received from the original enclosure .

Prince Nicholas of Werle let the castle build at the middle of the 13th century for the protection of the town "Wesenberg".

During the Mecklenburg-Brandenburg disputes (mark count's wars) the castle was from 1276 in varying possession.

From 1329 the Mecklenburg rulers received the country of Stargard as a fief. In 1352 Mecklenburg-Stargard became an independent dukedom under Johann von Mecklenburg. At times the castle of the widow Herzog Ulrich II served as a residence. After 1500 the castle Wesenberg became a princely office.

The result of the Thirty Years' War was an extensive destruction of the castle arrangement, preserved remained only the torso of the donjon tower and parts of the castle wall in the south. Thus the big house of the castle was called about 1660 uninhabitable .

You are Godehard of Wesenberg, mark count of Wesenberg, and are in a bad situation. You would be with pleasure a sovereign of Mecklenburg, however, with this attempt you have created many enemies. Too many, and everybody will attack you, one after the other. Only God could probably assist you , however, he is occupied elsewhere.

The map is a level 3 map , still the castle has the castle few supplies and hasn't strong defenses.. The question is not whether you win. You probably do not win. The question is only, how long you resist, and you must resist 5 attacks. Hence, you should fasten the main castle in the more peaceful times further. The extensive precastles are fast taken. Hence, you should rather use the outer courtyards as igneous traps for the hostile hordes which will come there.

Someone certainly knows a lot of history ;)