Having many meanings throughout History, the use of The “White” (solid colored) Flag, is most common when used by Land Forces, by which to signal “Parley” or “Truce” in relations to seeking Terms for Surrender. It was made an Official component of The Act of Surrendering by The International Hauge Conventions for Governing Warfare in 1899. As far back as the 2nd Century BC (Ancient China), “White” Surrender Flags are documented. The same is seen in 1st Century AD Rome. Why the color White was chosen is still a matter of unresolved debate with Historians. The most common theory is that during The Middle Ages, those exempt from Combat had to wear White Cloth armbands.

In France around the 17th Century, The Royal Standard of The Monarchy used a solid White Flag. This created some issue – especially aboard Royal Ships. Naval Services as well, recognized a “White” Surrender Flag early, but began to use the custom of simply “lowering” their Colors (Ensign) as a way to convey surrender. The French Monarchy would devise The Triband Flag and eliminate The White Royal Flag as a result.

While no official Flag is created for Military use, the style arose that any item of solid White cloth could be used to surrender a Military Force. In many “Urban Tales” – storied of White Shirts attached to sticks or poles could be waved or used. Examples documented state of White Laced Officer Shirts used by The British Army to surrender at Yorktown during The American Revolution – have existed for Centuries. 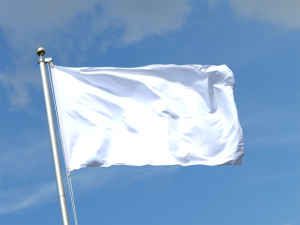