Voss was one of very few German Flying ''Aces'' who is credited with (48) confirmed Kills. Born in Krefeld, Germany in 1897 – moderately ''well off'' (His Father owned a Dye Factory), Voss decided to ''make His own way'' and enlisted into The German Army in 1914 as a Mechanic and Qualified Motorcycle Driver. He transferred to a Hussar (Cavalry) Regiment and saw Action. His heroism in combat earned Him The Iron Cross.

Transferring to The Imperial Flying Service, He excelled in His Training. So much so, His School kept Him as a Flight Instructor (NCO). Voss is seen as the youngest Instructor in The German Flying Service. Finally allowing Him to Fly in combat (as an Observer), He would eventually receive His Commission as an Officer and sent to a Combat Squadron (1916).

Given an Albatross Tri-Plane, Voss earned Decoration after Decoration – and kill after kill. His skills were as such that the vaunted Baron Manfred von Richthoven requested His transfer to His Squadron. The Baron befriended Voss and further expanded His Skills as a Fighter Pilot. It was just hours after His 48 kill, that Voss was finally shot down by an English Fighter over Belgium. Buried by The British in that Country, with full Military Honors, Voss' grave location would be subsequently lost to time. Voss won almost every German Award for Fliers at the time, including the famed Pour Le Merite of ''Blue Max''. Was was 23 years old when He was shot down. 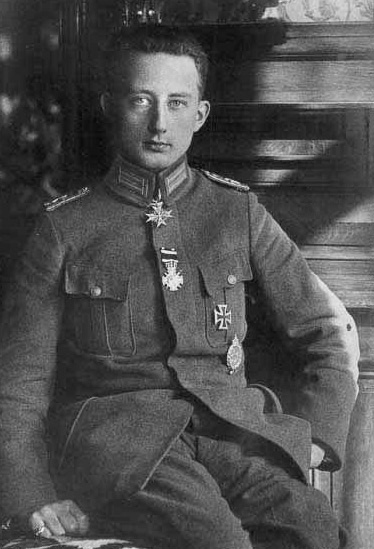