The “Montana”-Class Battleship “Iowa” was the Lead Ship of her Class and named for The State of Iowa. She is also the only US Naval Battleship to have served in The Atlantic. “Iowa” was chosen for use by President Franklin D. Roosevelt to transport him and other top Naval and Military Officials to The Tehran Conference in 1943 (a “Big Three” Meeting with him, Churchill and Stalin) – to discuss the course of World War II. The initial construction of “Iowa” was to counter The German Battleship “Tripitz” (operating in The North Atlantic).

While she was the only US Battleship assigned to The Atlantic Theater of War, by 1944 – “Iowa” was deployed to The Pacific Theater to participate in The Marshall Islands Campaigns and The Palau and Mariana Missions. She was instrumental during The Philippine Invasion for her protection of the USS “Lexington” (Aircraft Carrier). “Iowa” also supported Army General Douglas MacArthur’s “Return” to The Philippines for it’s ultimate liberation. “Iowa” was almost lost in a major Typhoon in 1944, but survived (3 Vessels in her Battle Group did not).

“Iowa” was also present in Tokyo Bay for The Surrender of The Imperial Japanese Forces – which officially ended World War II. Unlike many World War II Ships, “Iowa” was not decommissioned and would later serve as Flagship for The 5th Pacific Fleet (1946). By 1948 however, The Navy “moth balled” “Iowa”. Recalled for The Korean War in 1950, “Iowa” provided Artillery support for US Army and ROK Army Forces. She remained on Duty until 1958 (and decommissioned again). In 1982, “Iowa” was taken out of storage and retrofitted in accordance with Federal Law which requires at least 2 “Montana”-Class Battleships present for Duty. She was armed with state of the art weaponry and navigational systems. During The Persian Gulf War, “Iowa” served in a Naval Blockade against Iraq.

The most serious tragedy in her long and illustrious career came in 1989, when a depressed Seaman committed suicide while serving in one of her Turrets. Detonating an explosive device, he and 46 other non-involved Sailors were killed “Iowa” was sent to The Reserve Fleet in 1990 and would eventually be finally decommissioned from Active Service. “Iowa” earned 9 Battle Stars. She was sent to The Port of Los Angeles in 2011 and is currently a Museum Ship. 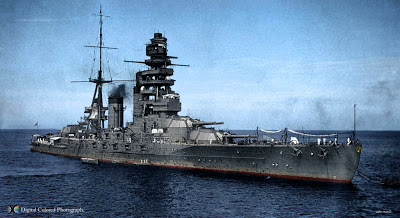