Known as "The Black Widow", The P-61 was the the largest Fighters constructed for The USAAF. It was also the first Fighter to incorporate Radar into it's flight systems. The basic designs used for The P-61 came from England's combat experiences with "night fighting" Germany's Luftwaffe during The Battle of Britain. A 3-seater, "The Black Widow" was 50-feet long with a 66-foot wingspan. Capable of airspeeds of 366 mph, the "Twin Boomed" Rail fusilage was capable of 2,000 HP. The P-61 had a 600-mile range with a 33,000 foot operational ceiling.

Armed with (4) 20mm Cannon with (4) quad, remote controlled .50 Cal. Machine Guns. These were mounted in a Dorsel Turret. The P-61 could carry up to 6,400 pounds of munitions. The revolutionary Radar aviation and systems was mounted in the aircraft nose and was controlled/monitored by a Navigator. Deployed to The Pacific Theater of War (Burma), as well as The Mediterranean, The "Black Widow" was an effective night-Fighter Bomber in wide use from 1942 to 1944. 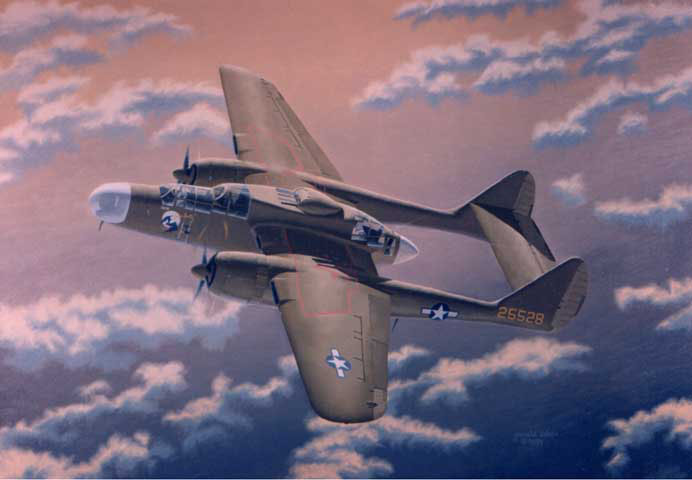