An early US Army Air Corps. Bombers used in the opening phases of America's involvement in World War II, The North American Company's B-25 "Mitchell", was named for Army Aviator and Pioneer General William "Billy" Mitchell. Used in every Theater of Conflict during The War, over 10,000 were produced. First flown in 1940 and introduced in 1941, The B-25 crewed 6 and was 53-feet long. Her wingspan was almost 70-feet long. Powered by twin (14) cylinder radial Engines, The "Mitchell" could achieve 1,700 HP and 272-mph. She had a 1,350-mile operational range. This was constantly tested by crews "stripping" all non-essential components prior to a mission. The "Mitchell" had an operational ceiling of 25,000 feet.

The B-25 supported (12) 12.7mm Machine Guns mounted at various points throughout it's fusilage. In addition, a 75 mm Cannon was mounted in her tail section. The B-25 could also carry up to 3,000-pounds of Munitions as well as a Mk 13 Torpedo. The B-25s claim to History, came in the months after Pearl Harbor. With The Japanese Attack, America wished to immediately strike back at Japan. An Army Air Corps. Officer, Lt.-Col. James "Jimmy" Doolittle - came up with a daring plan.

The plan involved using a Squadron of modified B-25s (launched from  Aircraft Carriers), to strike at Japan itself. Thought impossible, the plan was originally ignored. Dolittle met with US President Franklin Roosevelt, who quickly approved the plan. Not without risk, the attack against Japan was successful, but at a loss of half of the Squadron's Bombers. It was a psychological blow to Japan  (and a boost to America's War effort).

The B-25 was pressed into service by England's Royal Air Force in Europe with great success  (especially in The Mediterranean Region). Despite new ideas and innovations to Bombers, The "Mitchell" continued service throughout The War. 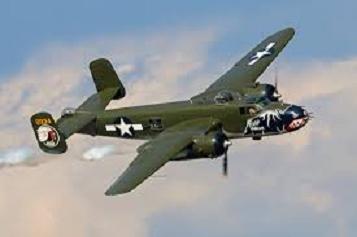