Nicknamed for American Civil War General William T. Sherman, The "Sherman" Tank was one of the most produced armored vehicles of The Second World War by America. Cheap and easy to build, assembly lines produced over 50,000 models from 1942 to 1945. Built by several Government Contractors, The Ford Motor Company eventually became the dominate producer of The M-4. Weighing 30-tons, The "Sherman" was just 19 feet long and 9 feet in height. Crewed by 5 men, it featured 4-inch armor plating. It's primary armament was the 75 mm Cannon.

This was augmented by a Browning .50 caliber HB Machine Gun and twin Model 1919 .50 caliber fixed mounts. The M-4 had a 30 mph land speed and could travel up to 120 miles. Large numbers were shipped to England in 1942, and they first saw Combat against the Germans in North Africa. 4 variants were developed, with The M-4 chassis even being converted to "Tank Destroyers" (The M-10). Although small, The "Sherman" was a robust Fighter that also saw service against The Japanese in The Pacific Theater of War. By 1955, The M-4 was for the most part discontinued for service, being sold mostly to Overseas Nation. The last use of M-4s in combat was 1971 during The Pakistani-Indian Conflict. 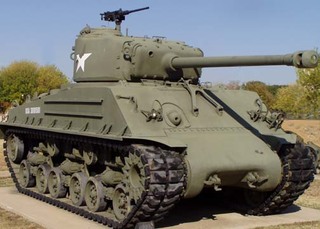