First developed for used by The US Army Artillery Corps. in mid-World War II (1943), The M21 Howitzer was a 240mm Field Howitzer. It saw service in Europe and later (more extensively), The Korean War (1950-1953). Over 300 Models were built. They would remain in US Inventory until the majority of it's High Explosive Ammunition was depleted in 1959. The majority of M-21 were sold to The Republic of Taiwain.

Weighing over 67,000-lbs, The M-21 had a 30-foot Gun Barrel and was crewed by 15 Artillerymen. It fired a 300-lb. High Explosive Shell to a maximum of 15-miles. The M-21 was ideal for penetrating a variety of reinforced concrete Military Structures. A well trained crew could deploy up to 30-Rounds per hours. Supported by a Hydro-pneumatic Recoil System, this was a massive piece of Ordnance. So large, it required (2) specially designed Carriages to hold The Gun and typically was transported to location via a dedicated Transport Vehicle such as The M-88 Tracked Vehicle or T-92 Howitzer Motor Carriage. 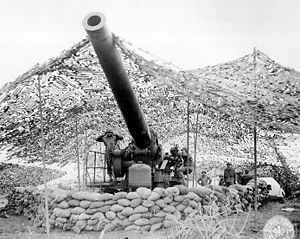