The M-10  3-Inch Gun Motor Carriage, nicknamed "The Wolverine". Was a "Tank Destroyer" Classification of Tank. They vehicle was designed to counter The German mass attack tactic known to The Allies as a "Blitzkrieg". Heavily armored, they were designed to add speed and stopping power via it's Main Gun to stop German Panzer and Tiger Tanks. Initially, the chassis for a standard M-4 "Sherman" Tank, of the two Models constructed - one was an open Turret and was enclosed. Development was between the years 1942 and 1943. The Wolverine was 30 tons and 25 feet long. It crewed 5 men. It's typical armor plating was 9.5 inches. It's Turret was fully rotational (360 degrees). The Main Gun was a 3-Inch (76mm) Cannon with an effective range of 8,000 yards. The Wolverine also was armed with .50 Caliber Machine Gun. It had a road speed between 30 to 50 mph. The heavy plating and sloping pattern of The Wolverine's armor was it's true strength. Several Battalions of so-dubbed "Tank Destroyers" were deployed to The European Theater of War. They were a critical component in The Battle of Anzio (Italy) in 1944. 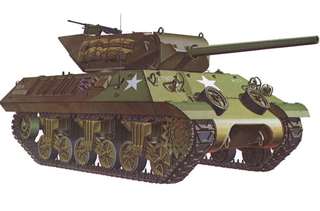