Deployed as The United States Navy's first Non-Rigid Airship, The DN-1 was launched in 1917. Built in The US State of Connecticut, The DN-1 was based on the then mass produced German Parseval Class of Airships. These had been proven during World War I as excellent Munitions Platforms for the Bombing of Cities by air (a totally new form of Warfare).

Not to be undone, The US Navy wished to deploy such Airships, not for Bombing of Cities but for attacking Enemy Ships from The Air, as well as serving as an Observation Platform at Sea. With the production of the first DN-1 Prototype, heavy testing and experimentation was conducted by The Navy. This was to include “Sea Docking'' or ''tendering'' to a specially constructed floating Hanger Barge.

The DN-1 Class of Airship was 175-feet in length, with a 35-foot diameter. Overall volume of the Airship was 115,000-square feet. Propulsion was conducted by a single Sturevant Model 5 Gasoline Engine, capable of 150-HP. The Average speed was rated at 35-mph. The Airship skin was 2 (10)-inch layered cloth canvas, with a rubberized insert (2-inches in width), throughout. Hydrogen Gas was the primary lift compound.

Problems in testing (as well as a price tag of over $42,000 USD) primarily with control and a slow docking performance, quickly found The DN-1 falling out of favor with The Navy. After 6-months of testing, The DN-1 Class was quickly abandoned. Only one was ever built. 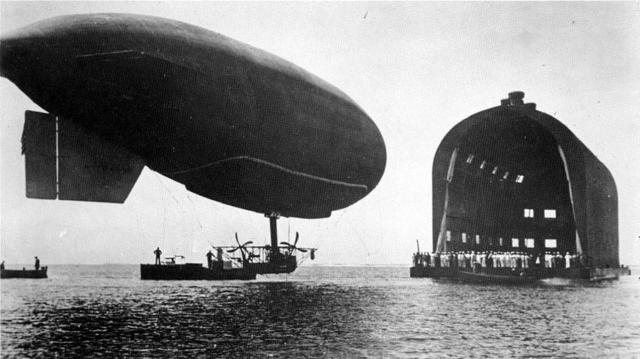