One of the first “all-metal'' Fighters produced in America, The P26 ''Peashooter” was also the first Pursuit Monoplane to enter Military Aviation in America's pre-War inventory. First deployed in 1932, The P26 was primarily an Army Air Corps. Fighter. Small but fast, it's size lead to Pilots nicknaming it “The Peashooter''. Although replaced in 1935 by more “advanced” Fighters, The P26 nonetheless remained in inventory, with many being incorporated into The Philippine Free Air Force. Many of these Fighters were a scourge to The Japanese Imperial Air Corps. When they attempted to control the skies over The Islands.

The “Peashooter” was 25-feet long with a wingspan of 30-feet. Crewed by a single Pilot, The P26 used no retractable Canopy. It was powered by a single Pratt & Whitney Radial Engine – capable of airspeeds of over 230-mph. The P26 mounted (2) .50 Caliber Machine Guns in the Wings and could deploy 200-pounds of Ordnance. The “Peashooter” was seen as an effective “Close Ground” Support Fighter. 151 Production Models were built with The Republic of Guatemala still The “Peashooter” as late as 1956. Many surviving examples still exist. 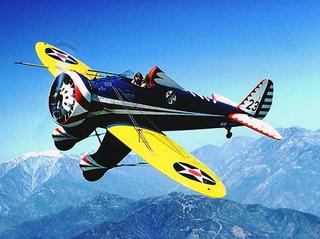