With their History traced to both The French and Indian as well as American Revolutionary War, The US Army Rangers are one of the oldest Elite Fighting Forces in The US Military. Rangers were responsible for the formation of The US Dragoon Forces in the early 19th Century (which would lead to the formation of The US Cavalry). Their fighting history was based on adapting the fighting tactics of The American Indians, which was based on “unconventional” or guerilla warfare. So effective were Ranger Tactics in The Continental Army, that even Great Britain adapted a Ranger Unit to counter American Forces.

However, The Rangers were never a “standing Force” and were often disbanded after major Wars. It was not until World War II (1942) that a “Modern” and standing Ranger Force was created. Trained as experts inland Navigation and Small Unit Tactics, Ranger are deployed far behind Enemy Lines. Their primary Mission is to disrupt Enemy Supply and Communications. The Rangers were very instrumental in The Normandy Invasion of 1944. During The Vietnam War, many Ranger Units were formed into Long Range Recon Patrols (LRRP), and were deployed many miles into Enemy Territory, serving in Covert and Overt roles.

Their training is grueling and considered some of the hardest in The US Army. Schooling for Ranger qualification is 60-days long, of which Candidates train for 19-hours a day. Lack of food and sleep are a hallmark of Ranger Training. They train in (3) Phases to include a Physical and Mental Qualifier, Swamp and Mountain Warfare. They are experts in Military Mountaineering and Land Navigation.

Upon graduating (of which they have a very high attrition rate), Rangers are award The Ranger Tab (a Black cloth Tab Patch with the wording “Ranger” in Gold). Traditionally, like The Army Special Forces who wear The “Green Beret”, Rangers were the only other Unit in The Army (other than Airborne Forces), to wear a Beret (Black). However, in 2001 – The US Army issued Black Berets as the standard Military Headgear of all Soldiers (much to the dislike of The Rangers). They adopted a Tan Beret to set themselves apart.

Currently part of The US Military Special Warfare Operations Group, The 75th Ranger Battalion is the only full Ranger Force in The US Army. They are Headquartered at Fort. Benning, Georgia. The Ranger Motto is: "Rangers Lead The Way". 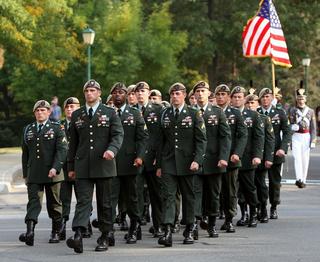