The 29th Infantry Division, known as "The Blue and Gray", was formed in 1917 for service in Europe during World War I. Composed of Units from Virginia, Maryland and North Carolina, The Division participated in several major battles, including The Meuse-Argonne Campaign. During World War II, The 29th was one of the "First Waves" to assault Omaha Beach during The Normandy Invasion of France and the Liberation of Europe. The Unit was recalled to The US after the War and went through a period of reorganization, before being Classed as Reserve Component (for 50 years).

Activated for service as part of The International Peacekeeping Mission in Bosnia and Kosovo  (1990), elements of the Division would be sent to Guantanamo Bay in Cuba as well as The Global War on Terror. The Active Reserve Division. Is currently in support of The Federal Emergency Management Agency (FEMA).

The Division Patch is a circular device. Two spiral symbols intertwine in the Center. With the Upper being Gray and the bottom Blue. This is to recognize the joining if firmer American Civil War "adversaries" (of which the Division was made up from). The Division Motto: "Twenty Nine, Let's Go!" 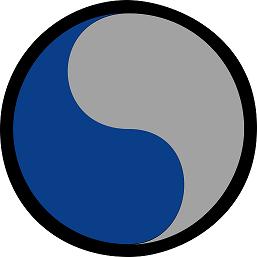