Designed in 1946, The Flag of The United Nations was designed to identify Member Nations (with their National Colors notwithstanding). The “UN” (as it has come to be abbreviated), was formed (similar to the defunct “League of Nations” in the 1920s) – to provide a united “Front” for Countries and Nations to stand together against tyranny, War and violations of basic Human Rights (many of which were destroyed during World War II). The Flag of The United Nations was designed and agreed upon by Charter Members – to be a Light Blue Field. The Central image used is in White was was designed by American Architect Donal McLaughlin.

The image (seen from Space), looks down upon an Earth, showing the majority of Land Masses from a 60-degree angle. A Quidistant Azmuthal (or Grid), covers the Entirety. Twin Wreaths (of Peace), encompass the Grid (except the upper portion which is open). The Flag is currently in use. The first “Conflict” that The UN Flag was used in was The Korean War of 1950-53. It is currently flown during The Global War on Terrorism by associated Nations involved. It was considered the “official” Flag of the somewhat unofficial “Cold War”.

Of a related note, prior to The UN Flag, Nations that were “United” for World War II (or The Allies), identified themselves using a Flag as well. These Nations would eventually form The UN. Known as The “Honors Flag”, it was instituted by US President Franklin Roosevelt in 1943. This Flag was of The Pennant design. It was (4) Red Vertical Stripes and (3) White. This Banner was used after The War until 1948 (even with the adoption of The Blue Flag). 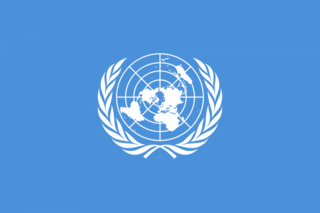 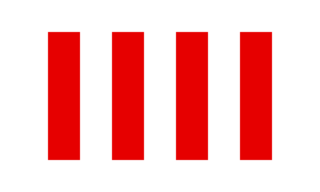