Named for Catholic Saint John of Nepomuk, The Spanish Imperial Naval Warship ''San Juan Nepomuceno'' was a Ship-of-The-Line, launched in 1766. She was assigned to The Armada (Navy) when launched – but would later be deployed to The Caribbean, to help guard Spanish interests.

The ''San Juan Nepomuceno'' was constructed of Oak Wood. She displaced over 1,700-tons and was 181-feet long. She stood (Beam) at 145-feet. The massive Vessel was a ''3-Decker'' Fighter, which featured (74) Cannon of various Poundage. She could support 530 Officers and Men. The Ship was a Full-Rigged (Sail) Warship with (3) Masts. Her large hold could maintain food for her Crew lasting 60-days with freshwater stores for 80 days.

The ''San Juan Nepomuceno'' was present at The Battle of Trafalgar (in support of French Forces) in 1805. She was de-masted by concentrated cannon fire, but she still maintained Her fight as a ''Gun Platform''. She was eventually boarded by The British Navy and captured. Over 400 Spanish dead strewn Her Decks.

The British Royal Navy would tow her back to Gibraltar. While the name HMS ''Berwick'' was chosen, she was renamed by The Admiralty The HMS ''San Juan''. In this role She served as a Prison Ship. Later during The Peninsular War (1807-14, again with France), ''San Juan'' was repurposed as a Gunship Flotilla Flagship.

After The War, ''San Juan'' was again sent back to Gibraltar and would serve as a Fleet Admiral Ship for those Senior Officers assigned to The Region. In 1816, She was sold off and scrapped for her wood. 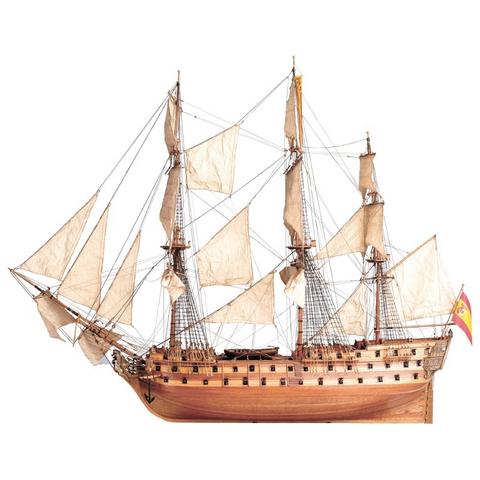