Part of The Hundred Years War, Cocherel was fought on May 16, 1364. After constant fighting with England, France had become divided and weak. The battle was fought ot settle a dispute over the succession of The Duchy of Burgundy. In 1361, with the unexpected death of Philip I (Duke of Burgundy), Charles II (Navarre), was a major landowner of the Region and claimed to be related (by blood) to Philip I. Not to be undone, French King Jean I also claimed right to The Duchy. Before Jean could launch an offensive against Charles II, he died – leaving Charles V on the Throne.

Charles chose Breton Knight Bertrand du Guesclin to command a Force against Navarre. About 700 Knights and 300 Long Bowsmen. were raised by de Guesclin. Charles II managed to raise 900 Knights for his cause. Taking the field outside of the Village of Cocherel (Normandy), de Guesclin began his assault. An uncompromising commander, he was often considered brutal. The Navarrian Army held the high ground (positions on a foothill). This forced de Guesclin to have to advance upwards.

Halfway up the hill, du Guesclin ordered a retreat. Turning back, The Navarrian Forces left their positions on the high ground to give pursuit. Unknown to them, as the made their way don to the bottom of the slope, du Guesclin had placed a hidden “flank” of Archers and mounted Knights. They swept the field from the right – and decimated The Navarrian Army! Charles V took control of the Region. 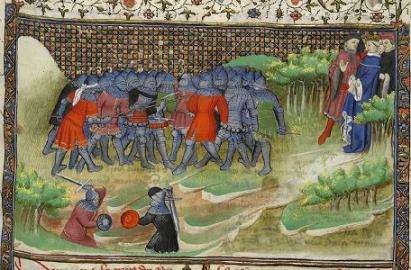