Seen in the late 16th Century (with variants going into the19th Century), The Spontoon was a direct ancestor to The Halberd and Pike. The head of The Spontoon was a double-edged blade (sometimes blunted), and ranged between 6 and 8 inches in length. Often featuring a crossbar mounted at the blade base, it was mounted on a 6 to 7 foot wooden pole. Initially designed to identify NCO on the battleline, it could be seen above troops to show the location of the NCO. Used to direct troops, it also served as a form of personal defense weapon. With the increased development of firearms, Spontoons were carried less and less. An example of their continued use as Period Ceremonial weapon would be The US 3rd Infantry's Old Guard Fife and Drum Corp. 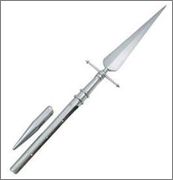