Located in San Juan Capistrano (Orange County, California), The Mission was founded in 1776. Considered one of the oldest buildings “still in continuous use” in California, the Mission was named for Giovanni Capistrano (Theologian and Warrior). Local Native American Tribesmen (Acjachemen), were mostly friendly towards The Spanish. Soon conversions yielded over 1,600 baptisms (and skilled workers!) The Mission was one of the first to plant, harvest and mass produce grapes for consumption and eventual alcohol production. The new strain of “Mission Grape” (a hearty species) – derived from these first experiments. Falling into ruin as a result of Mexican Confiscation, it was not until the 1850s that any type of renovations were attempted. Fitful stars yielded little progress until 1910. Using a “Tourism” angle, thousands visited the beautiful gardens and to have a chance to see the Swallows migrating from South America by the thousands as well). It is unclear as to just why the Avian species “picked” the Mission as their “starting and return” point for their migrations. The monies raised from Tourism helded restore the Mission to it's 18th Century appearance. The “Great” Stone Church (a central portion of the Mission Complex was constructed without wooden framing (and no mortar). Suffering in the 1906 Great Quake, it has since been retrofitted. In 1984, a more “Modern” Church was erected. Still inuse as an active Parish within The Catholic Church, the Mission portion is a Museum. 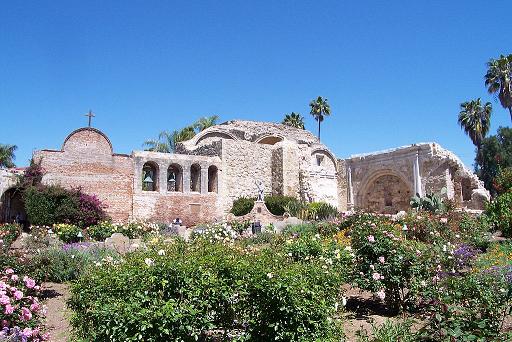