Perhaps one of the most well known of all “Disaster Ships” The Royal Mail Ship “Titanic” took 3 years to build. Constructed in Belfast, Ireland between 1909-1912, “Titanic” was one on 3 “Super Ocean Liners” built for The White Star Line. Heralded as the most well-appointed and largest Ships of her kind ever built, “Titanic” (and her 2 Sister Ships) were to capitalize on both the “Wealth” and “Immigrant” Trade in transporting Passengers from Europe to America.

“Titanic” featured the most “Modern” technological advances in Ocean Faring for her Era. Her 9 massive Decks, featured Rooms and “necessities”  that would rival any 5 Star Hotel. Spas and Saunas, Swimming Pools, Gyms, Tennis and Squash Courts – practically anything anyone could imagine “on land” was available on “Titanic”. She could hold a maximum of 3,200 passengers of The First, Second and Third – Classes. Her Crew compliment was over 880.

“Titanic” was 885-feet long, with 46,000-tons of iron plating, “cold riveted” to form her massive Hull. “Titanic” displaced 52,000-tons and sat 63-feet in the water. She was 175-feet tall with a 112-foot Beam. Her 40-mph speed was feed by 24-Coal Burning Boilers (pumping steam through 4 massive Funnels) that superheated twin Reciprocating Steam Engines. These generated 4,600 HP. Twin Propellers were mounted with 5-Blades each. She was deemed “unsinkable” by Builders, due to her 16 massive water tight compartments, each with electrically activated Doors.

Taking on Passengers in England and later France, “Titanic” began her Maiden Voyage on April 10, 1912. She was to arrive in New York Harbor on April 17th Tempting an enforced Speed Record through The North Atlantic (through still Seas) – proved too much for Titanic. She hit an Iceberg on 12th. Although it was speculated the collision caused a 300-foot gash in her Hull, it was much later learned that the impact was a series of glancing strikes which forced her rivets to pop as a result. Hundreds of gallons of water rushed into her Hulls. Although capable of remaining afloat with any 3 of them flooded, a design flaw in her water tight doors (spaces left at the top of each), causes the incoming water to slowing spill over into subsequent dry compartments. The onslaught of water proven too much for her pumps. The once harkened “Unsinkable Titanic” was indeed going to sink.

In waters close to 20 degrees below zero, Passengers had only 2-hours to abandon Ship. In this too was a fatal flaw, in that “Titanic” only had 20 Lifeboats (in an Era which did not regulate more). Although Women and Children were given priority, in the resulting chaos and confusion, Men took spaces reserved for them. Of the 2,224 Passengers, 1,514 would perish, most dying of hypothermia within minutes. Much has been written regarding the rescue of survivors. Several Ships were in the vicinity to help, but either had their radios off (as was common practice) or were too far off to render immediate aid.

With her exact position lost, “Titanic” remained a mystery for generations. It was not until 1986 when she was discovered by “accident”, resting in two pieces – over 2-miles deep on the Atlantic Seabed. Many Expeditions have explored the wreck of “Titanic”, with many myths having been solved. Although the cold depths have preserved much of her wreck, time has not been a friend to her. It is estimated that within 20-years, all traces of the once great and short lived “Titanic” will be gone. 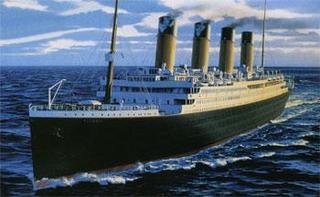