As we have seen, The United States Naval Patrol Torpedo Ships (classified as “Elco Boats”), were an important part of The Pacific Theater of War during World War II. Cheaply made and considered very expendable, one of the most (if not the famous), was The “103”-Class of Boat commanded by US Naval Officer and future President of The United States John Fitzgerald Kennedy. Her story (while not unusual for those who operated Patrol Torpedo Boats), quickly became legendary.

Her Class of Vessel was roughly 80-feet in length and was 20-feet tall (Beam). Powered by (3) Packard 1,500 HP Gasoline Engines could achieve 50-mph. As such, these were “fast” Ships designed to close in which Enemy Ships. Constructed from wood with light (less than .01-inch) Armor Plating, The “103”-Class was armed with 4 (21)-inch Mk III Torpedoes, (4) .50 Caliber Machine Guns and (2) .37mm Cannon. Her Crew was 14 Sailors and 3 Officers. The “109” was launched in 1942 and assigned to The Solomon Islands of The South Pacific. Her Commander, Lieutenant John Kennedy (who came from an affluent Boston Family), “Jack” (as he was known) – wrangled hard for a combat command. PT “109” would become just that.

Assigned to The Guadalcanal Campaign, “109” and other Boats of her Attack Squadron were operating near The Ghizo Islands when she suffered engine troubles, stalling in the fog shrouded waters. The Imperial Japanese Destroyer “Amagiri” purposely an “109” over – cutting her in half. Of her Crew, two were killed outright, with the remaining badly wounded and floating in unfriendly waters. Kennedy, rescued each and every survivor, pulling them to the beach of the nearby Island. With no food or water readily available, Kennedy kept his surviving crew alive and evaded capture until rescued nearly a week later.

The story of his gallantry lead to his award of The Navy Cross for Gallantry and would eventually help in his election as the youngest man to serve as President of The United States (at 43 years old). Despite being totally destroyed, a portion of “109” torpedo tubes were recovered in 2002. 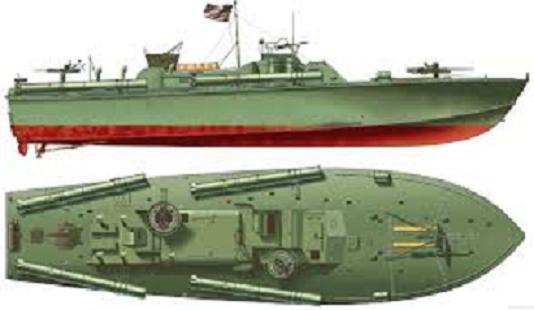