Linked to the San Diego Mission, The Presidio (Spanish for Fortress), was an important part in the growth of California Colonization (and defense of the same!) Designed with an aim on protecting Spanish interests in California from possible Russian incursions, The Presidio was established in 1769. The region was explored by Major Gaspar de Portola, and he placed The Presidio to guard The Bay of San Diego. Constructed originally of wood, The palisade of The Presidio was rectangular in shape and featured 30 foot high walls. Designed to safely house a Garrison of 150, plans were made to replace much of the temporary wooden structures by 1771. Bastions and Gun emplacements were built to support medium Coastal Defense Guns. The Garrison soon supported 300 soldiers.

The Presidio was used to launch a “counter attack” against the 1774 Native American Revolt against Spanish abuses. Suppressed, The Presidio served as protection to shipping into San Diego. With Mexican Independence in 1821 – The Presidio fell under their control. The Spanish removed all of their Cannon with the exception of the massive “El Jupiter” (a 50-pound Heavy Coastal piece). Mexico only lightly garrisoned The Presidio with 54 men. The Fort fell under control of California Rebels during The “Bear Flag Revolt” and later served as a major US Naval defensive structure during The Mexican War of the 1840s.. After The American Civil War, The Presidio was abandoned. Left unattended, it began to fall into ruin. Privately renovated in 1925, nothing of the original Presidio remains (save the location and Wall Markers). “El Jupiter” (the lone cannon), is still displayed. 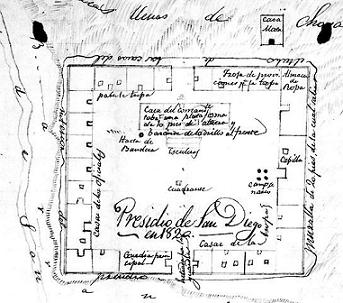