Although not a weapon, The Kamar was nonetheless an important component in the typical Ottoman soldiers daily needs. Versions have been traced by to the 10th Century. An all-purpose carry device, it could well be the prototype of today's "Man Pack" or even "Fanny Pack". Made of cloth originally, The Kamar was around 8 feet long and was wrapped around the waist  (several times). Compartments were stitched in to accommodate almost ALL a soldier had to carry (by way of weapons). Daggers, Bayonet. Sword  - the list was long. The Kamar was an excellent "Load Bearing" component. Leather versions were also developed for Artillerymen and Cavalry. The cloth versions were all typically red in color, to reflect the Turkish/Muslim religious association (red being the "holy" color of Islam, as opposed to the traditional green). Kamars were so popular in use, that versions could still be seen on the battlefields of World War One. 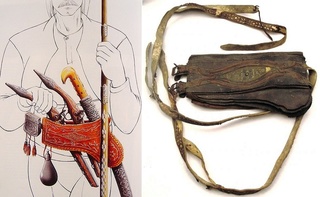