The Marquis of Newcastle was a Royalist who raised an Infantry Regiment of as many as 7 Companies for service to King Charles I, during The English Civil War. Formed in 1642 in Yorkshire, The Regiments wore White Buff Coats and were raised from Scottish recruitment. They numbered as many as 3,000. The Regiment fought in only (3) Major Civil War battles, being decimated at their third engagement at The Battle of Marston Moor in 1645. Their Regimental Colors were a traditional “Red” Field (for their Alligence to The King). The Upper Left Canton featured The White and Red Cross of St. George. Off-set in the Center of The Colors were (3) Crosses in White – establishing The Regiment's similar “Oath” not only to The King – but to God. As with most raised Royalist Regiments, only (1) set of Regimental Colors were carried along with The King's Standard of St. George. 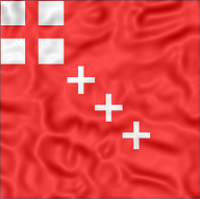