Raised in 1642 under Charles I for The English Civil War, The Lifeguard Regiment of Horse was a Cavalry Unit raised in Yorkshire. They participated in 16 Engagements (4 of which were Major Battles). Under command of The Earl of Essex, The (6) Companies of Horse were among the first to be issued Firearms (Harquebrusiers). Surrounded at Newark, The Regiment was forced to surrender. Their Colors were the traditional Royal Red, but they did not featured the iconic Cross of St. George. As Lifeguards (or a Royal Palace Company), they bore the Signet of King Charles I (a Gold “C” with matching “R” for Rex). Separating The Signet was a Coronet (Crown). Smaller Crowns were also embroidered over each Letter. Each Company would have carried The Regimental Banner. 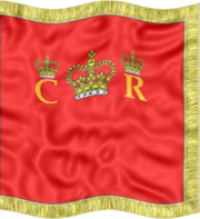