The Imperial Japanese Army's Type 95 Light Tank, named The "Ha Go" - was developed in 1933. Not mass produced until 1936, over 2,300 were manufactured until 1943. An Infantry Support Vehicle, The "Ha Go" was 7-tons in weight, 14-feet long and 6-feet wide. It crewed 3 men. Armed with a 37mm Main Gun, it was also supported by twin 7.7mm Machine Guns. Having only 1.5-inches of protective armor plating, The "Ha Go" was never envisioned to be able to counter full-sized Enemy Tanks. It was able to achieve 30-mile per hour over relatively flat battlefield conditions.

The "Ha Go" saw extensive service in Japan's Invasion of China. A drawback for The "Ha Go", was it's Turret could not be traversed automatically  (but rather, had to be "hand cranked"). In World War II, The "Ha Go" was a important component of Japan's Island Territorial Defense Program. Poor resupply of broken components, coupled with Japan's dwindling War Materials, saw little use of the vehicle after 1944. 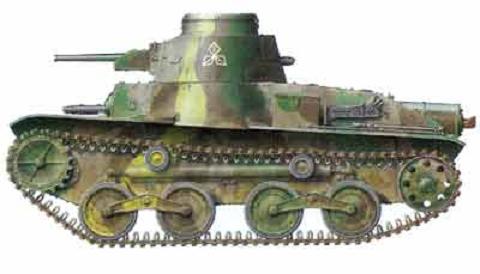