The Imperial Japanese Suguira was a late World War II sidearm, manufactured solely in Manchukuo (The Japanese controlled puppet State of Northern China). Over 6,000 Models were produced there – due mostly to major factory losses due to Allied Bombings of Japan. The Suguira was given to Japanese Occupation Forces. In design, the firearm was copied from The US Colt Model 1903 Automatic. Chambered for both a .25 and .32 Caliber Round, The Suguira was a bolt fed, blowback weapon, which held a magazine for (8) Rounds. These were cheaply made guns that according to most – failed for than they functioned properly. The maximum effective range of The Suguira was around 50-meters. 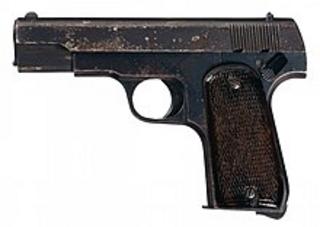