Germany was not the only Axis Power working to perfect Jet Fighters. Towards the end of World War II, Imperial Japan as well began to manufacture possible “Jet Fighters”. Much of their evolution and design was taken (or given) by Nazi German designs. The Nakajima Kikka 10, nicknamed The “Orange Blossom” was to be Imperial Japan’s first Jet Fighter. With shrinking Territories and War Materials in 1945, they still managed to built (and fly) a Prototype Fighter. Crewed by a single Pilot, The Kikka 10 was 30-feet long with a wingspan (semi-Swept) of 30-feet. It was powered by (2) Ne-20 Turbo Jets capable of achieving 430-mph. The Kikka 10 achieved an operational ceiling of 40,000-feet during it’s Test Flight. Armament was to have been (2) Wing mounted  Type 5 Cannons with the capability of carrying a 1,100-pound Bomb. (10) Kikka 10 were built, but The Atomic Bombings of Hiroshima and Nagasaki ended any possible deployments against The Allies. Several “survivors” are known to exist, but none are fully operational or assembled. 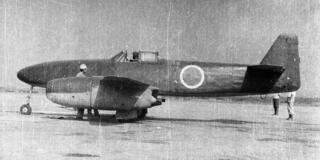