Another early survivor of pre-Feudalistic Japanese Castle building style, Ki Castle is located in Soja, Japan (Southwest). Constructed in the 7th Century, Ki Castle was originally the “home” of “The Onra Demon” (according to mythos). The “Demon” ruled the region. In truth, the “demon” may have been the local Warlord (Prince Ura). Originally called Castle Kinojo (Castle of The Devil), this Prince bears “some” similarities (in legend) – to another famous European Prince, Vlad Tepes. Although not as “cruel” in his retributions as the Wallachian Lord, Prince Ura was still a cruel taskmaster. Eventually defeated (and Castle Ki besieged), Ura was deposed by Government Troops (663 A.D.)

The general construction style of Ki Castle is similar to Korean forms. Many Warlords and Generals who returned back to Feudal Japan after the many Wars with that Nation, were impressed with the simple (yet strong) building designed. 12 such “Korean Style” Fortresses were built around Southwest Japan. Built into a sloping (almost falling over) style, large amounts of earth with reinforcing wooden spikes were raised at the top of a selected mountain or hill. Strong sloping defensive walls were built to defend against any fool-hardly attacks from up the hill slope. 4 Gates were built to provide access to Ki Castle (one of which was a Wet Moat).

A large defensive Keep-like Defensive Tower was built (over the front walls). This was more of a defensive fighting platform, that a residence. Although abandoned and reclaimed by Nature over the centuries, the remains of many of the interior buildings (and there were many), survived enough to give researchers an good description of what was inside Ki Castle. Since 1999, The Japanese Government began a series of in-depth renovations and reconstructions – to re-create Ki Castle from the 7th Century. 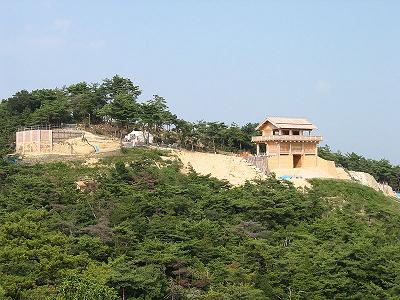